Jeremy's on the Hill

Five decades ago, my Louisiana grandmother traveled to Wynola, minutes from Julian, to find one of her favorite, and rare, treats: pickled pig’s feet.  Now, we can go to Jeremy’s on the Hill for gourmet, farm to table, house made pork sausage, pancetta, and other delectable meals.

Cordon Bleu dining is heralded by the crest on the sign at Jeremy's on the Hill, on Hwy 78 in Wynola, 4 miles north of Julian, California.  Chef Jeremy Manly brings gourmet farm to table dining to  this small, former gold mining town.   Building on lifetime relationships, Jeremy, the youngest chef to graduate from Le Cordon Bleu, has, at the ripe age of 25, established his restaurant as the place to go for inventive, fresh cuisine from local farms.
​
He even has his own charcuterie, where he prepares sausage, pancetta, and all manner of pork creations from heritage pigs raised by Cook Pigs (www.cookpigs.com); pigs who dine on apples, macadamia nuts, acorns, and avocados.

Jeremy's on the Hill is unassuming on the roadside, but intimate with personalized service on the inside.  Jeremy and his mother welcomed the Occasional Wine Council.  Jeremy taps local farmers, like Down the Road Farms, which is, actually, down the road.   He selects local wines to compliment his dishes; Julian, Ramona and Warner Springs are producing some world class vintages.

The Occasional Wine Council was joined by Big Blend Radio ’s Nancy Reid and Lisa Smith, a mother-daughter team currently traveling the country visiting all 401 National Parks and their communities.  Rooted in Julian, they brought local lore to life, with only a few tales of Jeremy’s younger years.  The OWC always votes on our favorite pairings, and we did so again.  Nancy, however, was right when she wanted to give every pairing a top vote.  The ranking was like ranking one’s children or favorite sunrises; each dish, each wine, each pairing, had its own stand out character.

Some People Don't Like Brussel Sprouts--Nobody Doesn't Like Jeremey's.  Jeremy's attention to detail showed in each dish we tried, from flash fried brussel sprouts soaked in citrus based ponzu sauce, to a strawberry shortcake with peach preserves flavored with oregano atop a few, all important, slices of apple mint.  Every dish, every pairing, excited our senses, with unusual combinations creating exceptionally enjoyable bites and sips.

A Turtle Rock Ridge Grenache Blanc from Ramona, silkily smooth with citrus and vanilla notes, served just under room temperature, was a perfect accompaniment to a salad of blistered jalapeño stuffed with Hunter’s sausage from Jeremy’s charcuterie, pears, and radishes three ways, including peppery, spicy radish leaves.  If you haven’t tried radish leaves, they are a treat—I’d say reminiscent of mustard greens crossed with arugula—but really, they are uniquely tasty.  The citrus of
the wine, pepper of the radish, and meltingly fresh sausage was the Wine
Council’s favorite pairing.

House made sage fettuccine with Jeremy’s own pancetta from local pigs and summer vegetable ratatouille, each component would be a great meal in itself, is a great companion for Warner Springs’ La Serenissima Winery’s full, earthy, Cabernet Franc.  Indeed, the Wine Council’s consensus found this to be the second favorite pairing.

I was so impressed with Jeremy's cuisine, I returned a week later after a hike for a burger and fries--crispy, crunchy, garlic herb fries with local bison for the meltingly delicious burger, paired with the bitterness of an IPA beer.  And I returned a week later, again, for a delectable, salmon fish & chips.  And I returned several more times, most recently in August 2014, when the Diver Scallop Salad and 3 Pigs (Cookpigs.com pork) filled us to the brim.  The scallops were caramelized and tender, the pork thick, flavorful, country.Whether fancy gourmet or great burgers, Jeremy's is the place for destination dining on the mountain.

Jeremy has recently taken over the local school nutrition program, and is planning to transform it to farm to table meals as well.   And, if you visit one of the local wineries, and are very lucky, you may well find Jeremy's dishes there as well--on a limited basis.  My recommendation, come to Julian for the shopping, the wines, the orchards.  Do not miss the exceptional, inventive and ever changing meals at Jeremy's on the Hill.  The brussel sprouts, by the way, go with every wine. 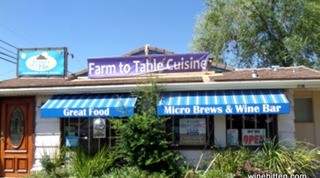 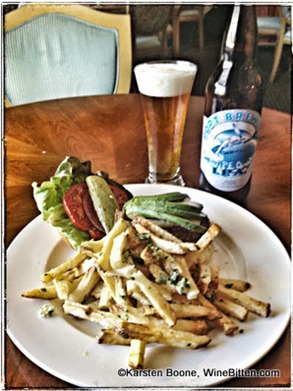 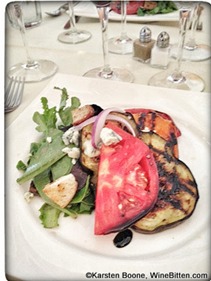 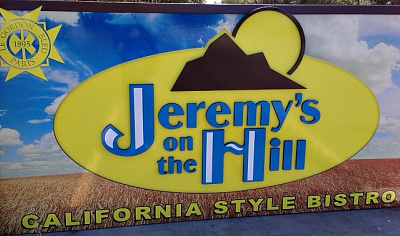 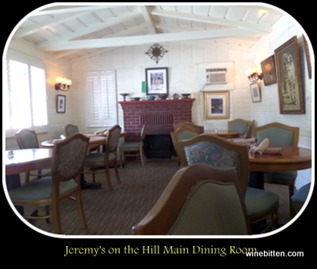 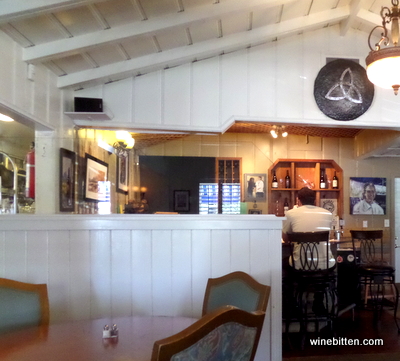 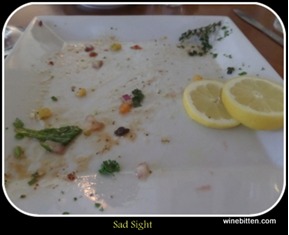 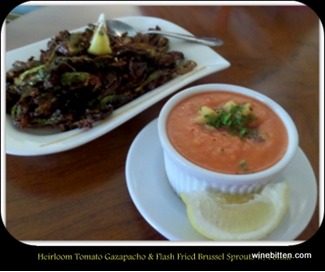