Wines of the
Piedmont:  Nebbiolo and Arneis

How many ways can you say Nebbiolo?
If you are Italy's DeMarie Winery, at least three.  All from 2009, all by the same winery,
perhaps from slightly different plots.  Each with its own unique character, attractions, flavors, and right moments, the breadth of the Nebbiolo experience enchants.

The Men’s Wine Council gathered at Tom Plant’s home, greeted by his own grape clusters, to try DeMarie’s wines.  Located in Italy’s Piedmont district, home to Nebbiolo, Arneis (sometimes known as the “white Nebbiolo” for its blending capabilities and parallel history), and Barbera, DeMarie produces a fine and varied line of these three wines.  As
always, we paired these wines with a variety of tasty dishes, and found each
teamed up well, with a few favorite matches.  Tom’s sweet, fruity, salty, caramelized onion and fig bruschetta was outstanding with every wine. 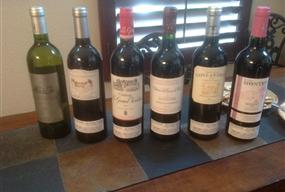 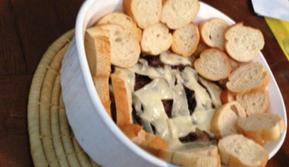 Arneis has been cultivated since at least the 1400’s, and is beginning a resurgence now.  I find it to be a full, velvety wine with some of Pinot Grigio’s tartness and crispness, but akin to Vouvray’s silkiness.  Typical of Arneis, DeMarie’s has a floral scent, is dry, and complex.
You’d never know this wine’s grapes comprised its sparkling sister.  At $15.99, this is a great alternative to Chardonnay and other, better known, whites.   It was overpowered by a rosemary roasted garlic pasta, except one teeny manicotti noodle at a time.  Try this
with a classic prosciutto melon wrap, or that great onion/fig bruschetta, and all its flavors are brought to the front.

Foggy Nebbiolo (the red Arneis?) took over with Nebbiolo D’Alba, at $24.99.  Deep, royal purple, with a spicy, berry nose and flavor, with just a hint of liquorice, this wine paired as well with dark chocolate as smoky venison.  Smoky, complex, accentuated by sweet berries, with the lightness I associate with Nebbiolo.

Ranging in price from $16.00 to $65.00, DeMarie’s wines were across the board quality, offering something for everyone’s taste.  The Barolo won everyone’s heart and taste
buds, but at a third the price, the Barbera was a close second.

If you like a sweeter, sparkling wine, an aperitif or welcoming wine, the Moscato d’ Asti, 100% Arneis grapes, is for you.   At $18.99, it has a Muscat’s sweetness coached from Arneis.  Floral, summer fruity, slightly acidic, Tom’s caramelized onion and fig bruschetta’s own sweetness was a superb complement.  The saltiness of the dish turned a sweet sparkler into a mellower, though still sweet, full bodied sipper.

Arneis was written about at least as early as the 1400’s, and its distinctive tartness rounded by velvet florals explains its attraction.  Like Nebbiolo, the Arneis grape spent much of
its history as a blending wine, but, in recent years, has emerged on its own.  Nebbiolo, a name derived from nebbia (fog in Italian), has many incarnations, from lighter versions reminiscent of Dolcetto to full bodied power houses akin to deep Cabernet Sauvignons, moved from blending to a star attraction decades ago.

Barbera D’Alba, 100% Barbera grapes, is a brilliant dark, royal purple, wine which paired with every dish.  At $19.99, its versatility makesit an excellent addition to any meal.   Here we found the stone fruits and mulberries, with just enough acidity to keep it refreshing.  Pair this with venison, with bruschetta, with pasta, with bacon Gouda cheese, with pasta, well, with just about anything.   I expected Barbera to be fuller bodied than Nebbiolo, and this was.

Barbaresco, and back to 100% Nebbiolo, but I almost thought we had ventured into a blend,
with Barbera’s richer colorful nose.  My favorite Nebbiolo at $54.99, and the group’s second favorite wine of the night.  There is cherry, yes; there is spice, yes; and there is a gentle dryness coating my taste buds.  Strong enough for smoked venison, drawn out by rosemary pasta, with a hidden sweetness delivered by the bruschetta.   Very harmonious, each taste left me ready for more.

Barolo, as expected, was the hit of the evening.  This is a splurge wine at $64.99, but well worth the splurge.  The Cabernet of the Nebbiolos, with garnet red hues, intense, complex with a little violet in the nose.  Full bodied, this is a main course wine which can stand on its own as well.  While the Nebbiolo D’ Alba had a light touch, the Barolo takes command.  It doesn’t overpower the food; it simply draws out all the flavors.

A version of this article was first posted on www.winechixs.com
View on Mobile