Want to know what you can get from a label?  Well, here you can get a little background on wine labels, and the new, innovative, color coded, don’t need to know a bunch of arcane stuff, labels from Uproot Wines, my new favorite cheat sheet.

How much do I really need to know to buy a good bottle of wine, which will have the flavors I want for my meal or event?  Should I have to know the intricacies of geography, climate, and varietal?  There are umpteen tastes of Zinfandel, depending on these things and more.  I’ve had Pinot Noirs that explode with nuance and some that trip very lightly over my tongue.  How to distinguish? Perhaps the label, like a book blurb?

Because grapes grow worldwide and each varietal, locale, and vintage have their own unique taste components, it became important to label wine early on.  King Tut’s tomb revealed wine labels from 1352BC, and labeling was common in the Persian Empire by at least since 500 BC, with the import of Phoenician and Greek wine.  It may have been tied on parchment, but it was a label.  The ancients, like us, wanted to know who made their wine, from what locales, at what times—so they knew what to expect when they poured a goblet.

As distinctive varietals emerged, with identifiable regional and varietal characteristics, accurate and informative labeling became a necessity.  Thus, over time, grape varieties became regionally associated, so that a wine from Chablis was known to be Chardonnay, a wine from Sancerre was known to be Sauvignon Blanc.  In the 18th Century, wine labels in Germany began to identify the grape varietal, as well as the district in which it was grown.  In the 19th Century, Baron Philippe de Rothschild pioneered brand specific labeling.  In the 1960’s Robert Mondavi brought varietal labeling to California.  In the 21st Century, Uproot Wines has brought informative labeling to the front of the bottle, providing a flavor palette—visually communicating what flavors to expect in each bottle of wine.

For those of us who bought French wine for years without knowing what varietals we were tasting—“it’s a Medoc”, well, isn’t that informative—Uproot Wine’s new labels remove the mystery and the need for memory.  We bought Medoc because we liked the taste, but we really didn’t know we were mainly drinking Cabernet Sauvignon; we bought Saint-Emillion, but we didn’t know it was the bane of Sideways, Merlot.  No, we had to take a class, or read a bunch, and then try to remember:  what region denotes what grape?  Otherwise, we had problems generalizing and branching out around the globe.

What do you know about a wine upon first sight of its bottle?  If it’s French, you will know the locale in which it was produced.  Is it Chablis or Montrachet?  Is it Premier Cru or Grand Cru?  Either way, its Chardonnay—but one will be steely crisp, another rounded rich.  If it’s Californian, you at least know the variety up front, but which version will it be?  A Pinot Noir with red fruit, light tannins, and high acidity?  Or a powerful, complex, long lived Pinot Noir?  You either have to read about it, talk to someone who has tried it, or just gamble.

Enter Uproot Wines:  put the tastes on the label—you don’t need to know what separates Napa Syrah from Santa Barbara Syrah from Rhone Syrah, look on the label and you will know what taste components to expect.  This is a daring thought, especially because everyone will get slightly different tastes from every wine.  The major components, however, should be reliably identifiable.  With Uproot, you can rely on the winemaker to identify the major tastes you will find.  Get to know Uproot’s label, and you may no longer have to vacillate between a Cabernet Sauvignon’s blackfruit and Merlot’s blackfruit.  Their label will lead you to the intensity of flavor you are looking for.

So, we put Uproot to the test, tasting four of their wines.  While there were some tastes that didn’t make it into the palette, the palette’s tastes were accurately indefinable in each.  The main tastes are expected from the varietal and the production process, and if you knew (1) the vineyard, (2) the vagaries of the vintage, (3) the varietal or blend proportion, (4) the production process (aged on the lees? Buttery Malolactic fermentation? Vanilla from Oak and how much?), you wouldn’t need the color palette.  But most consumers don’t know (or remember) all these or their taste impact.

With Uproot Wines, you know it’s from a good vineyard and well produced—that you know from the name.  Thanks to that color palette, you also know what to expect—without spending your time researching. 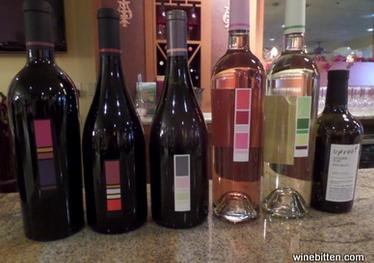 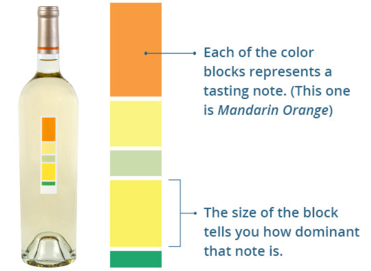